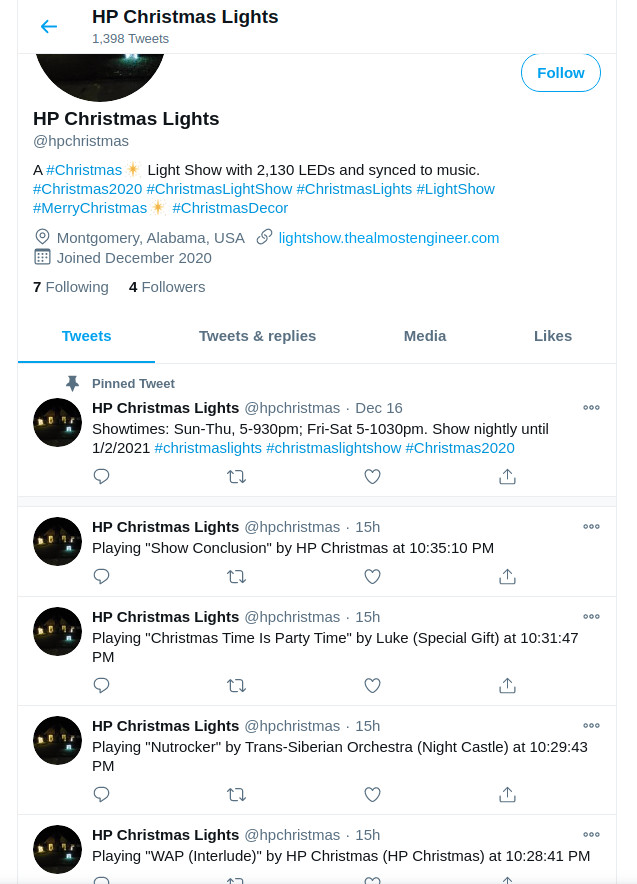 This project is designed for Falcon Pi Player to provide updates via Twitter on the light show that you are running. Those updates include posting the current song and providing alerts when problems are detected.

This application is ONLY designed to run on Falcon Pi Players that are installed on Raspberry Pi, but it may be possible to run it on Beagle Bone Black (BBB).

I wanted to have a way for the visitors to my light show are able to find out the information about the song that was currently playing. Some other Light Show Creators use screens or equipment that will display the song information on a visitor's radio using RDS (Radio Data System).

I did not want to have to invest heavy into this project, so after I found out that Falcon Pi Player came with an API, I decided to build a .NET Core application that would post the song information to Twitter. Then create a PSA (Public Service Announcement) in my show that lets visitors know about the Twitter page and that song and show information is available on this page.

While most of the plugins for Falcon Pi Player are written in PHP or Shell (Bash) Script, this application was originally written in .NET Core 3.1 and now uses .NET 5. While I do know how to program in PHP and Bash, C# and .NET Core is what I primarily use. Thus using this language and framework for the application.

In order to use Falcon Pi Twitter, you will need to have

This application is designed to be run as a system service. Below are the steps to install or remove it.

To install the system service, run the below commands. Note that the commands are designed to be ran from the directory that you have copied the application files to.

To uninstall the system service, run the below commands

To see the output from the logs, visit the Troubleshooting section.

To get started, copy the appsettings.template.json file to a file named appsettings.json. Then update the JSON file to have the values that you would like. Failure to copy this file, will result in the application not running and errors being logged. The appsettings.json file has multiple configuration values in it. Each of the sections below describe what values are expected in the file and how to configure them accordingly.

To change the logging done by the application, you may lower or raise the logging level. By default, only Information or higher severity messages are logged. We suggest that Debug logging not be turned on unless you are experiencing a recurring problem.

List each of the Falcon Player instances that you want to be monitored. The first instance is considered to the primary instance. This instance should be set to master or standalone within the Falcon Player settings. Each additional instance will be treated as a remote instance. When no hosts are listed in this section, this will default to "http://localhost".

AlarmUsernames should be the name of the Twitter account(s) that can be mentioned if there is an issue with the show (e.g. Raspberry Pi having high CPU temperature). Value needs to include the at (@) symbol. Each Twitter handle should be listed as a separate item in this file. When no value has been provided, then alerts will show up as public tweets instead of mentions.

MaxCpuTemperatureC should be the threshold that has to be reached before a high temperature alert is triggered. In warmer climates, you will want to set this value higher to prevent false alerts. This value needs to be in degrees Celsius. Per the Raspberry Pi documentation, 60 to 65 degrees Celsius is close to the safe upper operating limit of the Pi. When no value has been provided, this will default to 60.0 degrees.

MaxAlarmsPerHour is the number alarms that you will be notified about within an hour. Once this threshold has been reached, you will not be notified again until the next hour. The alarms will still be reported in the application log. To receive infinite alerts, set this value to 0. When no value has been provided, this will default to 3 alerts per hour.

Once you have finished updating the appsettings.json file, it should look similar to the example below.

To see the logged output from the system service, login to FPP via SSH and run the command:

If an error occurs in the application, the exception message will show here.

Additional bugs that you discover should be reported to the project Issues Queue.

This application calls the Falcon Pi Player API to get the meta data for the song that is current playing. Then it uses that information to compose a tweet. If the song that is playing does not have ID3 tag information entered, then will not display part or all of the song data. If you need to add the song meta data to the file, you can use a program like Audacity to do so.

How frequently are checks done?

Songs are checked every 15 seconds to see if it has changed. If the same song is playing from the previous check, then no tweet is posted.

Vitals are checked every 15 minutes. Alarms are based on the settings that you have defined in the configuration file.

I don't want certain playlists to post song information. How do I accomplish this?

Where is the source code?

Source code for this project is hosted on Github. The latest release can also be downloaded from here.

"Are you connected to internet? HttpRequest Exception occured" shows in the log. What does this mean?

This means that your Falcon Pi Player instance attempted to connect to the internet or another device but was not able to do so. Double check your network and internet connection to ensure that data can be sent. Also double check your configuration file as the hostname(s) may be incorrect or mistyped.

Why did you build a standalone application instead of an FPP plugin?

I work as a software developer primarily building web-based applications in C#. Based on what I have seen, most (if not all) of the FPP plugins are build with PHP. While I do know PHP and have worked with it in the past, I chose to go with building a C# application. as it gave me an opportunity to use my existing skills and expand them by applying them to something different than what I am used to.

I have a question not answered. Where do I ask it?

Please file an issue on the repo with your comment, question, or bug report. You may also send a message to the developer or the HP Light Show account.